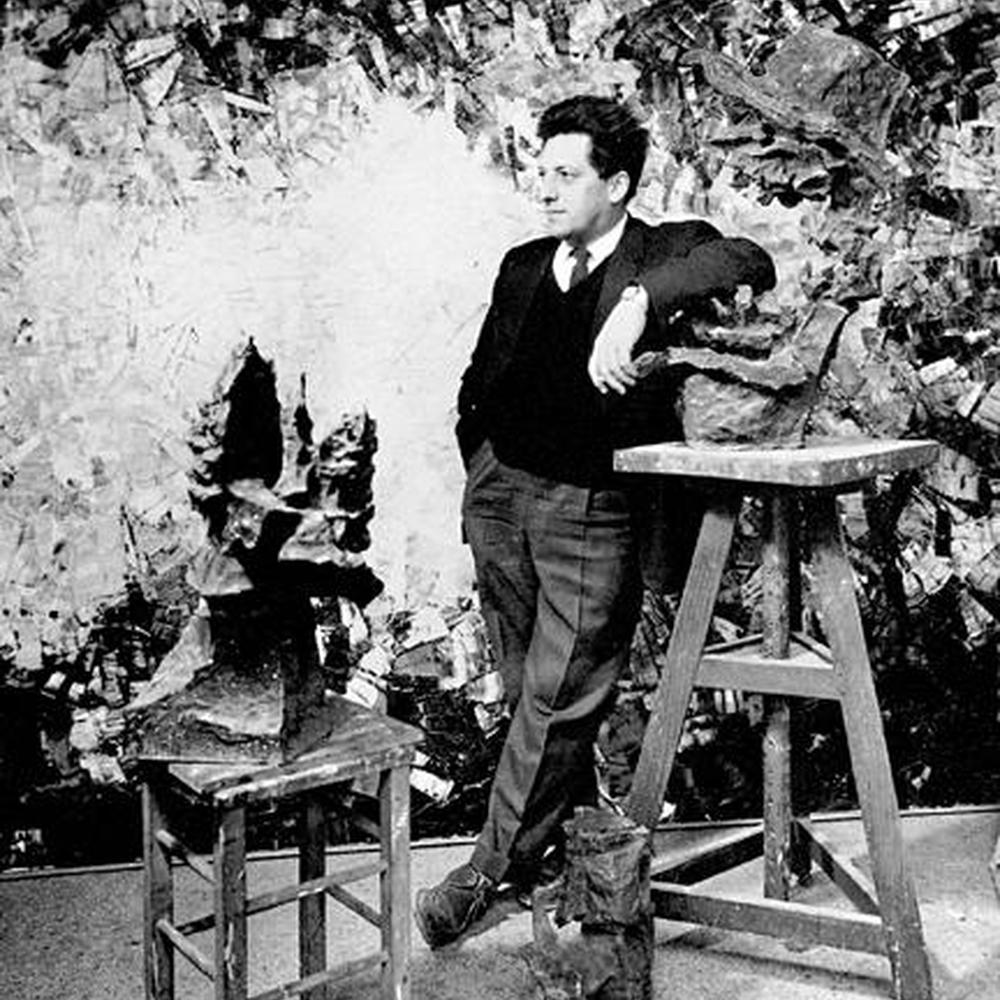 Jean Paul Riopelle was born in Montreal on October 7, 1923. At the age of seventeen, he began studying at the École Polytechnique, but left after less than two years, weary of its overly rigid teaching methods. He was then invited to enroll at the École du Meuble, where he met Paul-Émile Borduas. As part of Borduas' circle, he produced his first abstract works and mixed with those artists who, from 1946 on, were to become known as the Automatistes. 1948 proved to be an eventful year for Riopelle: he signed the Refus Global manifesto and, after its publication in August, took part in its public defence. And at the end of that same year, he and his family left to settle in Paris.

His professional career got off to a flying start in 1949 with his first solo show in Paris at the Galerie La Dragonne, an occasion marked by the publication of his very first exhibition catalogue, which featured a poetic text by none other than André Breton. This was followed by numerous group shows in France, Italy, Spain, England and Sweden in the early 1950s. From 1954 onwards, he had regular exhibitions at the Pierre Matisse Gallery in New York. Galerie Maeght in Paris took him on in 1966, dedicating a show to his work every two years. The Musée national des beaux-arts du Québec devoted a retrospective to him in the summer of 1967. Later, in 1972, a major exhibition entitled Ficelles et autres jeux was held at the Canadian Cultural Centre in Paris, and at the Musée d'art moderne de la Ville de Paris. In 1981-82, the Musée national d'art moderne (Centre Georges-Pompidou) organized a major retrospective of his work that was later presented at the Musée national des beaux-arts du Québec, the Musée d'art contemporain de Montréal, and museums in Mexico and Venezuela. The Montreal Museum of Fine Arts also devoted a retrospective to Riopelle in 1991, to celebrate the inauguration of the Museum's new Jean-Noël Desmarais Pavilion. In 1997, Montreal's Galerie Simon Blais organized an exhibition around several of Riopelle's works on paper, accompanied by the publication of the book Tigre de papier: œuvres sur Papier 1953-1989.

In 1992, it was announced that Joan Mitchell, his companion in Paris for almost 20 years, had died. Riopelle, shattered by the news, turned his hand to painting once again, producing the largest work of his career, the Hommage à Rosa Luxemburg, a triptych. It was painted on a huge canvas that Riopelle unrolled as his composition progressed; it was later hung on wooden stretchers that measured approximately 40 metres. This work is now on display at the Musée national des beaux-arts du Québec in Quebec City.